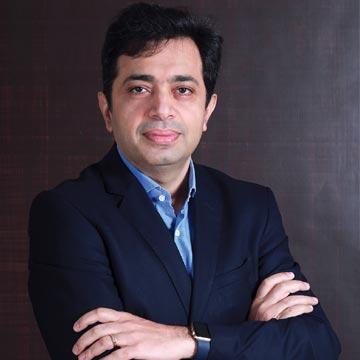 Gaurav Marya is the closest thing to a born entrepreneur. He started his first enterprise when he was still a teenage student at an engineering college. Dropping out of college he became a serial entrepreneur, setting up businesses in mobile phones, restaurants, entertainment and advisory services. Today Gaurav is hailed as the father of Indian franchising. The title is an acknowledgement of his unmatched efforts at evangelising the franchising concept across India. Having experienced an epiphany at a franchising conference and exposition in the USA in 1998, Gaurav returned to India to set up his own franchise consulting and media business. Franchise India became the largest integrated franchise and retail solutions company in Asia, and possibly the world.

Franchise India has grown exponentially. With a team of 700, 40 offices and outreach in 300 towns and cities, the Group touches more than five million individual entrepreneurs, impacting more than 2,50,000 businesses.

The media division organizes 300 conferences and expositions across 100 cities in India, and in the Middle East and Sri Lanka. It publishes 4 magazines, reports and books that have both wide circulation and critical appreciation. It’s franchise business website attracts 264,000 unique hits every month. The consulting, business brokerage and investment support division serves 2,500 brands and over a million investors. Valuable collaborations include a tie-up with Francorp, a leading global franchise consulting companies based in the US and Bradford Licensing LLC, one of the top 20 brand licensing agencies worldwide.

As Chairman of the Group, Gaurav is widely admired for his non-conformist operating style, direct and to-the-point advice and vigorous marketing tactics and strategy. He sits on the boards of several organizations and has been retained by several private equity funds. Gaurav has chaired several global business forums on franchising and retail in India, USA, Australia, Russia, Paris and London. His quotes are regularly sought by leading dailies and business journals in India and overseas. He has featured on several television shows on entrepreneurship and franchising. Gaurav is a great educator. His natural tendency in meetings is to sketch out his ideas on the wide canvas of the whiteboard. In the spirit of sharing his thoughts he has authored three bestselling titles on subjects dear to his heart and central to his business — Franchising: The Science of Reproducing Success, Take Charge! Building an Entrepreneur Mindset and It Takes Two To Tango: Achieving Customer-Connect in Shape-Shifting India.

Recognizing that more and more people in India are investing into active businesses and taking on the entrepreneurial path, Gaurav wants to serve this community better. He wants to build Franchise India as a growth specialist helping entrepreneurs, through knowledge and service, on all aspects of buying, setting up and growing a business.